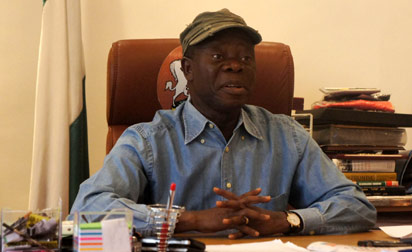 By Simeon Nwakaudu It has become clear that the APC National Chairman is suffering from extreme delusional fixation on Senate President Bukola Saraki.  This ailment presents in the form of the unjustified belief that the solution to the failed Failed APC Federal Government is the impeachment of Senate President Bukola Saraki. This fixation is a function of Oshiomhole’s non-existent education.  Nigerians are aware that Adams Oshiomhole is one of the high profile individuals in this  failed APC Federal Government with a dent on their educational background. Oshiomhole’s vision is blurred by his circumstances and experience.  Despite exposure to money and authority, he suffers demeaning inferiority complex.  Oshiomhole struggles everyday to prove himself because of his deficiency in ideas and education. Whoever selected Oshiomhole to become the National Chairman of the APC,  injured the country.  Just look  at the motor park ideas that now govern the APC.  True the party was anti-development, but since Oshiomhole  was imposed on that political platform, the unthinkable now  happens.Defections and counter-defections have continued to rule the political space. Before the gale of defections from APC to PDP, several PDP lawmakers had defected to the APC. The first time Oshiomhole called the Senate Presidency the crown of the APC, he was flanked by two former PDP Senators.  Hope Uzodinma (Imo) and Sonnie Ogbuoji (Ebonyi). They had with them crowns they obtained while in the PDP . Oshiomhole  saw nothing wrong with their defection.The Factional National Chairman of the APC blamed the abject failure of the Buhari administration to the late-passage of budget by the National Assembly.  But he forgot that every budget runs an annual circle until the next budget is passed.  Therefore, trying to blame Saraki for Buhari’s failure is ridiculous. Buhari had the opportunity to execute projects as he waited for the passage of the 2018 budget. Oshiomhole is the summary of everything that is wrong with our country.  Misfits in positions of authority.  Men who lack information on the development process.  Let’s imagine for a minute that Oshiomhole succeeds in impeaching Saraki which justifies the billions he received to execute the project. Of what benefit will that be to the country, aside Oshiomhole’s bragging rights in front of national television. The driving force for Oshiomhole is the money. We are aware of the funds at his disposal and that of Senator Godswill Akpabio to pay off Senators to sign the impeachment notice. According to Senator Rafiu Adebayo Ibrahim representing Kwara South,  lawmakers belong to the Parliamentary Support Group, received the sum of $1m each (N360million) to impeach Senate President Bukola Saraki and his Deputy, Ike Ekweremadu.If the stoppage  of defections was Oshiomhole’s goal, what has he done about the 50000 APC members who detected this week to the PDP in his home-state of Edo. Oshiomhole also did nothing about the 5000 APC members who defected to PDP in Nasarawa State. Of course, there was no funding from the APC Federal Government to tackle this.If National Interest mattered to Oshiomhole, he would have realised that in three days Fulani herdsmen killed 12 persons in Benue State, a policeman in Edo State while armed robbers killed 15 persons in Edo State.  Within the same period, Boko Haram invaded a military base in Borno State and killed 17 soldiers. This APC Federal Government has failed in developing  the security infrastructure of the country despite taking $1billion USD (N360billion) as security fund. Rather than use the security agencies to protect Nigerians, the APC Federal Government uses them to perpetrate illegality. There is no way that Saraki will be impeached through legal means. The funds being shared Senators can construct several roads, hospitals , schools , water projects and rural electrification  in the affected senatorial districts. To secure the signatures of 73 senators to impeach Saraki at N360million per senator, Buhari’s Failed APC Federal Government requires N26billion.Based on Senator Rafiu Adebayo Ibrahim’s revelation, $1million is just for each signature of a senator.  What about the impeachment logistical support, impeachment contingency fund and impeachment security fund? This impeachment project being coordinated by Oshiomhole will gulp over N50billion. Oshiomhole is so confident that Saraki would be impeached through signatures because he is convinced that senators won’t reject the mouth-watering offer. But all these expenses are coming from the National Treasury, perhaps through the bullion van, NNPC.While Oshiomhole was busy bragging that Saraki would be defeated in Kwara State, the worst liar in the nation’s history, Lai Mohammed has withdrawn from the governorship race of 2019. Lai is simply preserving what is left of his political personality because he knows he will lose woefully.  So, on what ground is Oshiomhole boasting? Even in Edo, he had to rig, using Security Agencies and INEC.Oshiomhole should be explaining to Edo people how he squandered their resources and left a debt of over N140billion. He should be offering explanations  of the development deficit in Edo State that forced APC Federal Government to rig on behalf of the incumbent Edo State Governor. All well-meaning Nigerians, irrespective of political affiliation should ostracize Oshiomhole.  He is a threat to democracy.  His lack of education is a major challenge to our peaceful  transition from Buhari to another administration.  He cannot comprehend the complexities of the rejection of the APC Federal Government.