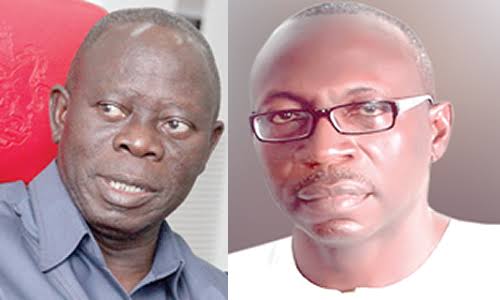 The parable of the two blind men leading each other ended in disaster. Such fate awaits Adams Oshiomhole and Pastor Osagie Ize-Iyamu. The former, a disgraced and suspended former national chairman of the All Progressives Congress (APC) and the latter, a “partyless” politician, whose obsession to become governor has made him to return to his vomit.

These former political foes turned friends have reunited again for just one reason–power– and they want it so badly. They are so desirous of power that not even the unprintable names they called each other prior to the 2016 Edo State governorship election will stop them from joining forces to dislodge the one God has given power–Godwin Nogheghase Obaseki.

Ize-Iyamu knows Oshiomhole too well and vice versa. He was head of his reelection campaign team in 2012 and at a time the South South vice chairman of Oshiomhole’s party, the now defunct Action Congress of Nigeria (ACN). These are the reasons why the things said about each other could not be treated with levity. The high point of Oshiomhole’s characterization of Ize-Iyamu was when he described him as someone that cannot be trusted with treasury and unworthy of political office.

Oshiomhole said, “I didn’t appoint Ize-Iyamu because of his past record. I would not be comfortable to put government money in his hand. That is why I kept him completely out of government. I didn’t even give him a board appointment. He was part of the government that looted Edo State treasury. Don’t put the key to your kitchen in the hands of someone you don’t trust.”

How about what Ize-Iyamu said about Oshiomhole before their latest rapprochement? At a rally in Uromi in July 2016, Ize-Iyamu described Oshiomhole has the greatest fraud that has ever occurred to Edo State. He said costs of projects at the Edo University, Iyamho, were unknown, stating that Oshiomhole built a 168-room hostel for N1.8billion, inferring that a room in the hostel costs about N10 million.

He said, “In Edo State today, the cost of executing projects is not known. The level of corruption is unbelievable and I challenge Governor Adams Oshiomhole to publish the cost of every project he claims he has executed since he became governor.

“For Edo people to appreciate the gift you are giving them, you must tell them the cost. It is not enough to point at a road constructed. That information will be better appreciated if you tell them the cost.”
According to Ize-Iyamu, the renovation of Imaguero College was done for N800 million. Yet, all that was done in the old school was to merely change the roof, tiled the floor and painted the walls.

On performance in some critical sectors, he said, the entire Edo secondary schools, we have only twelve physics teachers. In all government hospitals, we have only two general surgeons, two orthopaedic surgeons and one dermatologist, who is on contract employment.

“In the whole of Edo State today, there is just one quantity surveyor. One man that was brought from Kaduna, who does all quantities. He is the who that quantifies the job, supervises and okays payment. Corruption cannot be worse than that.”

Today, however, the two men now shamelessly stand next to each other on podium as they attempt to tell Edo people that the things they said about each other in the past were all politics and that they should be disregarded. Should these politicians ever be taking serious again as men of honour worthy of occupying important offices? No one is in doubt that the motif for their current collaboration between the two is power and access to the treasure of Edo State.

Everybody knows that Ize-Iyamu has since been deserted by the APC after the Edo State chairman of the party, Anslem Ojezua, declared that the APC has no candidate in the forthcoming election. No wonder his campaign does not have the participation of APC members in the state and why he is stuck to the sacked National Chairman of the APC, Adams Oshiomhole, who also has no party, having been dismissed from the party

While Oshiomhole and Ize-Iyamu hid behind a veil and orchestrated a failed forceful hijack of the Edo State House of Assembly on Thursday, they surely must come out now to tell Edo people how they plan to win the forthcoming guber election by all means as their actions have shown. They might think they have their job cut out by the police, who for the umpteenth time confirmed their bias by attempting to lead the absentee 14 Edo lawmakers-elect, whose seats have been declared vacant, to hijack the leadership of the assembly.

One should remind Ize-Iyamu and his ilk that nothing could be compared to people’s resolve. Edo people are prepared this time around to make sure that their votes count. They are used to the antics of Oshiomhole and are ready for him. Since Oshiomhole thinks he can single-handedly decide the fate of the rest of Edo people, the people are ready more than ever before to prove to him that Edo indeed belong to them all and that no man is God.

It is also now clear to all discerning minds that what is playing out in Edo State is a plan by a faction of the sinking opposition APC to intimidate the PDP and illegally impeach its candidate, Governor Godwin Obaseki, having seen clearly that they cannot win the September 19, 2020 election. They perhaps hope that the illegal impeachment before the election will help their cause. How wrong and infantile their plot is.

The question is, if Ize-Iyamu, Oshiomhole and others in their group were certain of victory on September 19, why resorting to illegal means and violence now that it is just six weeks to the election day? Did the lawmakers-elect just wake up from their slumber to fight for their rights? Did they not do the needful by approaching a court? If Ize-Iyamu and his cohorts were so confident of victory, why did they not wait for Obaseki to complete the remaining few weeks they said are left for the governor?

This piece was contributed by Osaro Erhabor.

Orbih: crisis in APC will translate to PDP’s victory in Edo