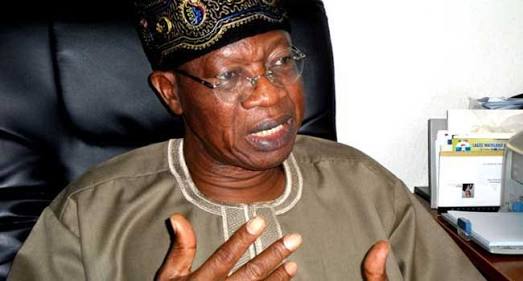 Nigeria’s information minister, Lai Mohammed has admitted he did not do due diligence before signing off on a controversial N2.5 billion payment to a private digital broadcast signal distributor.

Mr Mohammed, while speaking told the Independent Corrupt Practices and other related Offences Commission (ICPC) that he only approved the payment based on the recommendation of the director-general of the National Broadcasting Commission (NBC) in May 2017, according to those familiar with the investigation.

Anti-graft detectives at the ICPC have been investigating the transaction since June 2018. Already the ICPC has charged Modibbo Kawu, the DG of NBC, for allegedly deceiving Mr Mohammed to perpetrate the fraud.

Mr Kawu strongly denied the allegations, and the ICPC said he would appear in court on Wednesday alongside Lucky Omoluwa, the founder of Pinnacle Communications Limited, a digital broadcasting firm that received the payment in 2017.

Anti-graft officers questioned Mr Mohammed last year as part of their investigation, but he was unable to provide any information beyond his claim that he only acted on the documents presented to him.

An ICPC official told PREMIUM TIMES Tuesday that Mr Mohammed “bullied” those detailed to question him because of his “high role” as the top image maker for the government.

Even though Mr Mohammed did not cooperate with investigators, the ICPC had been reluctant about charging him for approving the contract.

Rasheedat Okoduwa, the agency’s spokesperson, told PREMIUM TIMES on Monday that Mr Mohammed was not charged because he said he was deceived into signing the payment.

Mrs Okoduwa, however, added that if further revelations emerged during Mr Kawu’s trial that could necessitate arraigning Mr Mohammed, the ICPC will not hesitate to do so.

Documents seen by PREMIUM TIMES showed that Mr Mohammed played more role than just signing documents. He signed several documents and also took parts in discussions between Pinnacle Communications and embarked on foreign trips to inspect equipment for Nigeria’s digital switchover, according to those familiar with the matter.

Mr Kawu told PREMIUM TIMES he did no wrong in recommending the payment to Mr Mohammed, but did not assume responsibility for the minister’s approval. He explained why the N2.5 billion was paid to Pinnacle, and all the projects the company executed to fast-track Nigeria’s adoption of digital switchover.

The N2.5 was withdrawn from the N10 billion naira that the Economic and Financial Crimes Commission (EFCC) seized from the NBC in 2016. Detectives said the money was banked in a manner that violated the treasury single account (TSA) policy.

The anti-graft agency later released the entire N10 billion to the NBC and Mr Mohammed to carry on with the digital switchover project. A 2017 memo to the Presidency, seen by PREMIUM TIMES, specifically said the N2.5 billion was to be withdrawn from the NBC account in the TSA system.

The minister declined comments to PREMIUM TIMES on his submission to the ICPC.

Attorney-General Abubakar Malami had already expressed intention to take over the case, but ICPC officials feared it could be politicised and vowed to continue with the prosecution of Mr Kawu and others.

Mr Kawu told PREMIUM TIMES he suspected political forces were out to get him, but not that he had done anything wrong.

“I have been informed from several quarters that there are certain political forces who are determined to use the issue of a court arraignment to force me out of office,” Mr Kawu said. “The plan is to lean on such arraignment to commence a media campaign that will insist I step aside from my position until I have been cleared in the courts.”

Anti-corruption campaigners said they were not convinced by Mr Mohammed’s explanation because it had no legal backing.

“There is no law in Nigeria that says an official could assert ignorance after signing such a humongous amount of money in one of the world’s poorest countries,” Yomi Ogunsanya, a lawyer and an anti-corruption activist. said.

Mr Ogunsanya described Mr Mohammed’s excuse as “pedestrian” and called on the ICPC to charge him alongside others.

“Ignorance does not excuse anybody when it comes to approving public funds,” Mr Ogunsanya said. “Can we say the minister has been approving billions for agencies under his ministry without necessary scrutiny?

“Ordinarily, the minister should have conducted his own due diligence, he has enough officials on public payroll who could do the job for him,” the lawyer added. “The ICPC should immediately charge him as the minister that supervised the payment.”

Mr Ogunsanya said even though the contract was a dent on the administration’s anti-corruption posturing, the trial that had emanated from it should be seen as a bright spot, especially because it has the potential to throw up fresh revelations.

“A lot will probably be revealed in court that will further expose how far the minister was involved,” Mr Ogunsanya said. “But we can also see the ICPC charges against a senior government official as progress.”