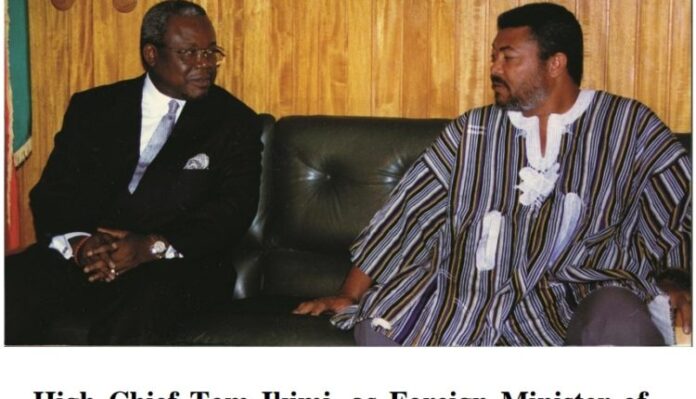 Jerry John Rawlings, the pride of Africa, and my own very dear friend was one of Africa’s most misunderstood statesmen. The reason for this is very clear: he was one African leader who never did the ordinary or the pedestrian, and who successfully broke with political convention.

Perhaps the most distinguished member of the second generation of African postcolonial political innovators, Rawlings would best be remembered for inaugurating the tradition of an enduring, well-structured continental democracy which emerges from the people’s experience and consciousness of who they are. If Ghana was one example, Rwanda is another.

A truly gifted individual, Flight Lieutenant J. J. Rawlings had a prospective life direction as a young man. But he chose the burdensome, hazardous and even sacrificial path of a revolutionary, placing all he was and could become on the line, to forge a path of greatness, not just for his dear Ghana, but for Africa as a whole.

The example of Jerry Rawlings was unprecedented and is still unparalleled in Africa – a man who taught us that a country can take its destiny in its own hands; that one singular inspired, visionary individual, and not a band of profiteers and mercenaries, could lead the charge to retrieve that destiny from the brink of extinction. JJ was a humble man who by a stroke of the pen, could transform himself into a four-star General but he remained Flight Lieutenant for life!

Like most other progressive minds, I first knew Rawlings from all the legendary history spins around him as the Ghanaian leader that restored the dignity of his country in one of the most astonishing narratives of a national renaissance ever told. But later, I got to know him better from close range when I served as Nigeria’s Minister of Foreign Affairs, 1994 -1998.

I had the task, at the Ministerial level, of leading the Ecowas operation to bring to an end the war in Liberia and secure sustainable peace for the troubled West African country. With Nigeria leading the ECOMOG troops, President Rawlings ensured seamless cooperation with the Ghanaian troops, thus facilitating the surrender of Charles Taylor and the end of the war.

Indeed, as a courageous and ideologically persuaded pan-Africanist ally, who could defend the honour of an embattled brother-African country no matter what it cost him, Rawlings stood tall and strong for Nigeria during our protracted crisis of the 1990s, and the elaborate design of the international community to victimise Nigeria and extend a neocolonial stranglehold over the Giant of Africa.

To recall a specific spectacular instance, I was moved to tears (as the embattled Foreign Minister of Nigeria) when Rawlings dressed down the entire Commonwealth establishment for interfering rather uncharitably in Nigeria’s internal affairs. This was at the very explosive Auckland Conference of November 1995.

In a retreat meeting room, jam-packed with only Commonwealth Heads of States and Governments, including Prime Minister John Major of Great Britain, late President Mandela of South Africa, President Arap Moi of Kenya, late President Robert Mugabe of Zimbabwe etc, and myself as leader of the Nigerian Delegation to the Conference, he courageously cited in detail his own world famous revolution in Ghana, stressing without any equivocation that Africa was capable of solving its own problems and that Nigeria should be given a chance to mend its own leaky roof!

By that well-articulated rebuke, the meddlesome international community took clear note of Africa’s rallying march for a Nigeria undergoing a necessary but acute process of establishment. However, J.J. and I were closer than mere pan-Africanist comrades.

Over the years I admired and enjoyed his unusual capacity for friendship. I was therefore not unduly surprised when he turned up at my 70th birthday celebrations in my hometown Igueben (Edo State, Nigeria) on 25th April 2014. It was probably the first time a Ghanaian leader of his status visited Nigeria under such circumstances. His visit was most appreciated and is still a talking point in my community and beyond to this date. Such was his level of commitment to alliances of value.

Such was the kernel of his principled self. This is not an occasion for a long disquisition, but we must pay tribute to a remarkable man who taught the African leadership class how to make power count in very transformational terms so that when a proper history of Africa will be written by Africans, we will indeed know how to apportion heroism to our leaders.

While the place of the Kwame Nkrumah’s will be secure in the pantheon of founding fathers of post-colonial nations, the significance of the likes of J.J. Rawlings as the practical framers of the postcolonial continent will remain etched in our minds forever. And I mean forever.

Adieu, my dear brother and friend. May your gentle soul rest in peace. Amen.

The Ministry of Youth and Humanitarian Affairs assures of collaboration with...