Home News Edo At Its Bermuda Triangle, Crying For Rescue 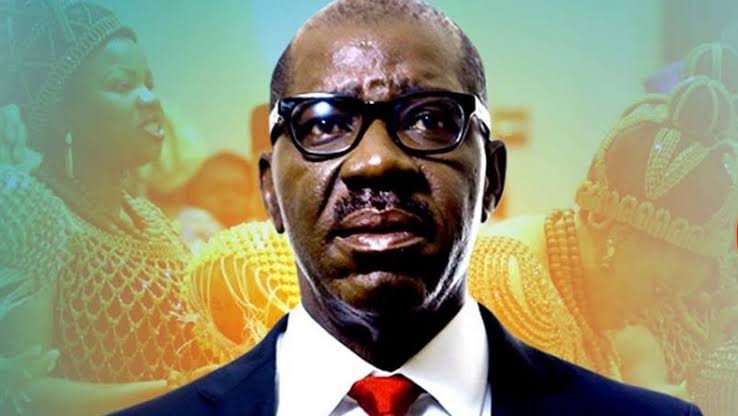 The well polished propaganda and poorly crafted falsehood been peddled by both the official and unofficial media handlers of Governor Godwin Obaseki targeted at hoodwinking innocent Edo citizens seems to be the new found path of those currently at the helm of affairs in the state.

Popularly referred to as the “Wake and See” Governor in his early days in office, is known for employing cheap and palliative measures to solve longterm challenges which has cost more harm than the intended good.

At a point, Obaseki’s penchant for junketeering, gallivanting the world all in the name of scouting for any coloured skinned to append his signature with, suddenly became the norm. But if I may ask, with almost 3 years into this administration, what can we point to as Obaseki’s achievement after the numerous MOUs?

Meanwhile, it was reported that he (Obaseki) at “74 UNGA” was commended for EdoBEST (Basic Education Sector Transformation). Many will say that the accomplishments of the “obubuyeye” scheme can only be seen on white paper, not on ground.

How has the so called innovative flagship education initiative in Edo State, transformed our public education system and improved learning?

Should Edo people be excited over the dilapidated school structures, non availability of teachers especially science tutors in our rural areas?

What baffles me is that, I am not sure the governor is aware that people from Ugbiyokho in Uhunmwode LGA in Edo state, who are predominantly farmers have relocated their children to Ekpoma in Esan West LGA to attend primary and secondary school.

Can this be compared to the glorious era of Professor Ambrose Alli? I challenge this government to carry out an audit of all primary and secondary schools in the state, they will be amazed!

With the myriad of challenges bedeviling the Education sector, one begin to wonder, the rationale behind conferring on the governor an “arrangee” award by the National Union of Teachers (NUT).

Perhaps, the continuous closure of the comatose Tayo Akpata University of Education, Ekiadolor and College of Agriculture, Iguoriakhi which has rendered staff and students jobless and wonderers are enough reasons for Edo people to celebrate Governor Obaseki?

On the other hand, the state government may have overhauled the tax collection system with a new innovative method but truth be told, the implementation of the new innovation with branded thugs has left little or nothing to cheer.

Interestingly, the talk about Obaseki crushing thuggery and Agbero in Benin city, is like the fairy tale story titled “Three Princes of Serendip”.
You need to see how traders are treated like slaves, not to add the poorly constructed road bumps built to harass motorists which later has a negative effect on the durability of our roads, mostly seen at the outskirts, precisely Egor near Egbaen junction at Upper Siluko Road.

Never in the history of this state has Edo sons and daughters been humiliated and imprisoned for their inability to part with some obnoxious fees all in the name of paying fines.

The story of thuggery is synonymous with a popular local adage which says that “soldier go soldier come barrack remains the same”. Have we forgotten, how Edo/Abuja legislators who have abandoned their legislative duties for over months were mercilessly beaten at a hotel in Benin? Oh, your guess is as good as mine, the newly “Men” in town reporting for duty?

Which other sector has Obaseki’s impact been felt rather than the area of road infrastructure? Noticeably, the large chunk of roads either constructed rehabilitated with substandard materials majorly in Oredo LGA leave a lot of questions to be answered by the “Technocrat Governor”. How come our roads are constructed or rehabilitated in the morning and returns to an abysmal state in the evening, usually washed away by rainfall.
Please, don’t tell me they are NDDC, SEEFOR, EU, World Bank or ECOWAS roads!

Why waste tax payers money on the rehabilitation and construction of roads which wouldn’t be durable? As this has geometrically increased the numbers of bad roads in Benin metropolis.

Weeks from now, we hope that Governor Obaseki will use the annual talk show and political jamboree christened ” Alaghodaro Summit” to avail Edo people the opportunity of getting the progress report concerning the provision of 200,000 jobs, building of mini stadia across the 18 LGAs, reopening of the 5 star central hospital and the controversial Benin Water Storm project, etc.

EDO STATE NEEDS TO BE RESCUED!