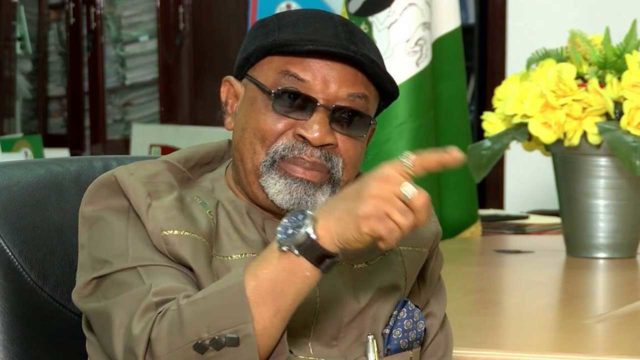 Stakeholders continues to decry brain drain in the health sector. The Minister of Labour and Employment, Dr. Chris Ngige, yesterday in an interview said that doctors who want to relocate to other countries in search of greener pastures are free to do so, claiming that Nigeria has enough medical personnel to cater for the population.

Ngige who made this comment in a television programme while responding to a question on brain drain and the deliberate recruitment of Nigerian doctors by foreign embassies to the detriment of the nation’s health sector.
The minister claimed that Nigeria has 350,000 medical doctors, far more than the 260,000 which, according to him, the World Health Organisation (WHO) prescribes for the country. He said there was nothing wrong with doctors leaving the country as they would continue to send home money which could, in turn, grow the economy.
“I am not worried about doctors leaving the country. We have surplus. If you have surplus, you export. It happened some years ago. I was taught chemistry and biology by Indian teachers in my secondary school days, they are surplus in their country. We have surplus in the medical profession in our country. I can tell you this. It is my area, we have excess,” he said.
When asked why Nigeria is not having doctors to man rural areas, Ngige said: “Who said we don’t have enough doctors? We have more than enough, they go out, they sharpen their skills. You can quote me. There is nothing wrong with them travelling out. When they go abroad, they earn money and send them back home here. We have foreign exchange earnings from them and not just oil. Those guys go there, they are better trained because of the facilities they have there.
“I know some of them who have come back home and opened medical centres here. I know a doctor from America who left in the 80s, we were in medical school together. Now he has a facility in Imo State. He has about four facilities in Maryland where he’s practising, and so you tell me that it’s a brain drain.
“They set up medical centres back home, and in their centre, they have CAT scan, MRI scan which even the government cannot maintain. So, I don’t see any loss.”.
When asked if brain drain is not hurting the health sector, the minister said: “Brain drain will only be inimical when, for instance neurosurgeons travel and we don’t have neurosurgeons here.”Nigeria is believed to be one of the countries most affected by emigration of medical professionals, with about 12 doctors leaving the country every week.
But the President of the Nigerian Medical Association (NMA), Dr. Francis Adebayo Faduyile, and a former president of the National Association of Resident Doctors (NARD), Dr. Onyebueze John Ugochukwu, refuted Ngigie’s claim that the country has surplus doctors and can afford to export them for economic gains.
Contrary to the figures rolled out by the minister, the NMA president, in his reaction, revealed that Nigeria has 75,000 registered doctors, out of which only about 40,000 are practising in the country. Faduyile and Ugochukwu told The Guardian in separate phone interviews that Nigeria does not have enough medical doctors to serve the population. They said the country has a doctor/patient ratio of 1: 5000 against the WHO recommendation of one doctor to 600 patients (1:600).
The duo blamed poor working conditions of not just doctors but all health professionals in the country and the harsh economic realities for the mass exodus of Nigerian trained doctors, especially to the United Kingdom (U.K.), United States (U.S.), South Africa, Saudi Arabia and Europe.
They alleged that government at all levels in the country are not interested in the welfare and health of the citizens. They also blamed the perennial low budgetary allocation to health, which has been consistently below six per cent of the national budget against the African Union Declaration and WHO recommendation of at least 15 per cent.
Faduyile said: “We do not have surplus doctors in Nigeria. The doctors we have in this country are inadequate to serve the over 200 million population. The WHO recommends one doctor to 600 patients for adequate and quality health care delivery, but in Nigeria we have one doctor to 5,000 patients. That means a doctor in Nigeria is seeing 10 times the number of patients he or she is supposed to see. In the UK, it is 2.8 doctors to 1000 patients while in Nigeria it is 0.2 doctors to 1000 patients. It is really unfortunate.
“As it is, I sympathise with the Minister of Labour and Productivity because he lost the argument. He is looking at the economic cost or benefit but there is the alternate cost. The more our doctors leave this country, the more mothers and children are dying. That is why we have high maternal and child mortality, very low lifespan and expectancy and poor disease treatment outcomes. These are effects of not having enough doctors.
“The exodus of doctors is at the expense of the lives of Nigerians that will be lost.
Presently, anybody who has cancer is doomed because government does not have plans. Anybody seeking specialized care is in trouble because we do not have adequate provisions. Presently, there are no neurosurgeons because the government has refused to employ them.”
The NMA president added: “I want the minister to put a price on human life. What he has shown is that government officials are not interested in the lives of the populace. In 2001, at Abuja, the African Union agreed on allocating at least 15 per cent of member countries’ national budget to health but Nigeria has never gone beyond six per cent in the last 18 years.
The health budget has been less than five per cent. The proposed 2019 budget for health is about 3.4 per cent. It shows that government is not interested in the health of the populace.”
According to Ugochukwu, although the current administration has made some progress in improving the health sector, the minister is not abreast of the current realities facing doctors. “Doctors are leaving this country because of poor working conditions and harsh economic environment. We do not have enough doctors yet, many are resigning, some are not practising like the minister, and some have died.
Tweet
Pin
Share
0 Shares