Home News 2019: Why Atiku, Tambuwal, Saraki and others must sign undertaking- PDP. 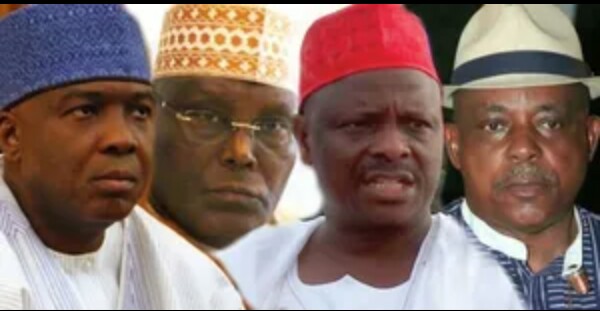 The national leadership of the Peoples Democratic Party has said that all its presidential aspirants must sign an undertaking that they will abide by the outcome of its presidential primary slated for October 5 and 6.

Also, the party said that the aspirants would give a commitment to the party not to defect to other political parties either before or after the primary.

A number of politicians have already declared their intention to run for the presidency in the PDP.

All these politicians are expected to sign the undertaking.

Already, the National Working Committee of the party said it had met with the aspirants during which they were told that the party would not favour any of the aspirants for the party’s presidential ticket.

The National Publicity Secretary of the party, Mr. Kola Ologbondiyan, who spoke with one of our correspondents in Abuja on Friday, said that all the aspirants had been informed about the need to have what he called “code of conduct” ahead of the primary.

One of our correspondents also gathered that the party had informed the aspirants that the undertaking, which it said would be binding on them, would be put together by the party’s national leadership.

Ologbondiyan said that the party had already started drafting the undertaking, which he also referred to as Memorandum of Understanding.

He said, “It is an undertaking and it will be signed by all our presidential aspirants. The undertaking will tell the aspirants what the party expects from them before, during and after the primary.

“The undertaking will make it clear that all the signatories must abide by the decision of the party concerning the primary.

“The party is already preparing it and I want to say again that it will be binding on all those that are taking part in the presidential primary and are signatories to the MOU.

“However, I want to make it clear that the party is not into any illegal act. We are going to organise a transparent, free and fair presidential primary, whose outcome will be acceptable to our party, the contestants and the electorate.”

He said it was gratifying that some of the aspirants like Atiku and Lamido had publicly said that they would not defect from the party irrespective of the outcome of the primary.

Meanwhile, our correspondent gathered that the party was still working on the number each state would have as delegates to its national convention where the presidential candidate would be elected.

Investigations by Saturday PUNCH showed that this was because of the defection of some hitherto statutory delegates from the party to other political parties.

Many aspirants may step down in September – Source

It was also learnt that many presidential aspirants in the Peoples Democratic Party may step down for other contenders in the party in September in the run-up to the 2019 elections.

A source in the PDP told Saturday PUNCH on Friday that the national leadership of the party had met with its presidential aspirants to tell them that some of them would need to withdraw from the race to boost the chances of the stronger candidates among them.

“The leadership of the party held a meeting with the aspirants where they were told that some of them will step down for the candidates that are strong enough to challenge President Muhammadu Buhari in the 2019 presidential election. So, many of the aspirants may step down for others in September,” he said.