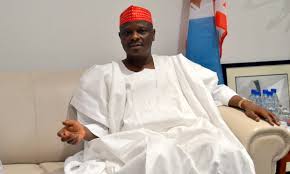 •North will not vote for Buhari – Dan Musa

KANO State, a swing state in Nigeria’s electoral map, witnessed a flurry of political activity and debate as a result of the defection of Senator Rabiu Kwakwanso to the Peoples Democratic Party, PDP. From the streets of Sabon Gari, to the Sabon Bakin Zuwo Road seat of government, actions and talks were centred on the exit of the former state governor from the All Progressives Congress, APC.

Even the leadership of the state House of Assembly was caught in the web of words (apologies to James Murray and Oxford Dictionaries, who authored Web of Words) regarding the development. In Kano, Saturday Vanguard observed that the news of the  former governor’s defection,  immediately sent his supports into a celebration across the streets. They sang and danced around the city in celebration of Kwakwanso’s return to the PDP.

At the rallies that were organised, brooms were burnt to symbolise that they  no longer have anything to do with the APC.

There were also gatherings were Kwankwasia red caps and his campaign posters were burnt by APC supporters. Known as the Kwankwasia Political Movement, the supporters are millions, who subscribe to Kwakwanso’s political ideology. Saturday Vanguard can authoritatively state that its support base extends beyond Kano, with strong presence in virtually all the northern states.

The movement  has followership in the grassroots and top hierarchy of the political configuration of Northern Nigeria.

The popular symbol of the group is red cap and the movement gained more prominence in 2011 when Kwakwanso was in the PDP.

The group has played major roles in Kwankwaso’s political activities and popularity.  Currently, there are  six members of the state House of Assembly that are members of the Kwankwasia group.

While some prominent members of the fold refused to speak to Saturday Vanguard on the ground that they are watching as events unfold, a former governor of the state, Mallam Ibrahim Shekarau welcomed Kwakwanso.

Though the two personalities had political differences in the past, the later saw the former’s presence in the PDP as an asset.

However, his remarks had  a caveat, stating that only a changed Kwakwanso is welcomed to the party.

Shekarau, who spoke through his media aide, Sule Ya’u Sule said:  “I hope the PDP has received a reformed Kwankwaso. I hope it is not the old Kwankwaso I knew.”

Saturday Vanguard, however, learned that there are concerns about the likelihood of a supremacy battle between the defectors and those they met in the party.

Notwithstanding, the duo command huge followership that could shape calculations.

Concerned by insinuations that the state House of Assembly, could be  affected by the turn of events, the Speaker of the House, Alhaji Yusuf  Atta reiterated the House’s loyalty to the APC.

He further said the House has 40 members from the 44 Local Government Areas in the state, adding that 33 are loyal to President Muhammadu Buhari and the state governor, AbdullahI Ganduje.

He said: “Six members, who are staunch followers of Kwankwaso, as well as one PDP member who clinched the mandate through  a Supreme Court judgment are still with us. Negotiations have reached advanced stage with some among the six APC supporters of Kwankwaso on how to join the  Ganduje camp.”

Instructively, with nearly five million registered voters as at January 2018, Kano is critical to who wins the forthcoming presidential election.  “The Independent National Electoral Commission, INEC, said the state currently has 4,975,701 registered voters.

That is why there are concerns regarding the effects the defection of Kwakwanso and 14 other senators could have on the party’s prospects. Many believe it could define the race to some extent. But some lawmakers elected on the platform of the APC  told Saturday Vanguard, that the party’s chances remain bright.

They added that the President  would win overwhelmingly in the north, adding that he is still popular across the northern states.

Senator Bukar Abba Ibrahim, who is representing Yobe East Senatorial District said: “No,  defections will not affect President Buhari’s chances in 2019.The earlier these mercenaries leave us the better. President Muhammadu Buhari has been fully accepted by the masses and the mercenaries will not change anything about it.”

Buhari’s support base is strong—Sen Ndume

Senator Ali Ndume, who is representing  Borno South Senatorial District said: “I don’t think so because the support base which is the masses is intact. In fact,  the implementation and successes of programmes like the N-Power, and  Anchor Borrowers Program,  among others,  have increased the support base. Buhari is only unpopular with people that have skeletons in their cupboard especially PDP members.”

A member of the House of Representatives, Mr. Chile Okafor representing Ehimembano/Ihitte Uboma/Obowo Federal Constituency said: “It  will not affect him directly because President Buhari has his profile. He has his personality. He has his credentials as a democrat, and he is an incorruptible President. You can say anything and everything about him, but you can’t say he is corrupt. You can’t also say he doesn’t mean well for this country. But we are waiting to see who the opposition will throw up.”

Nigerians are not happy with Buhari — Ozekhome

“That is important because the reason  impunity thrives in Nigeria is that those who engage in impunity and bad governance believe that Nigerians are very docile. They are so afraid of their lives, afraid of losing their businesses, and afraid of losing their jobs. But this time, we saw people saying that they are dissatisfied with the situation and that they will not take it any longer. That is a significant lesson.”

A presidential aspirant, Alhaji Ibrahim Dan-Musa, said: “The North would not vote for Buhari in the  presidential election. The people, having seen that Buhari is worsening Nigeria’s problems, will kick him out through ballot boxes.

“APC has disappointed Nigerians in the areas of food security, electricity, solid minerals development, youth empowerment, free and qualitative primary and secondary education and many other areas.”

But a member of the House of Representatives from Ogun State, under the APC, Mr. Kayode Olawale, said: “I am not threatened at all by the defections. We see the development as freedom of association. The people have the right to associate and belong to any political party of their choice, but that does not translate to victory.

“ That they have defected and are ganging up against the political party in power, is not new in Nigeria. People may say a similar thing happened in 2015  but what we must realise is that the  scenario is different. And I will tell say that the way the storm gathered during then,  was different from what we have now.

“The fact  is that Nigerians still believe in the process we have on the ground.

Our President feels he knows it all — Agada

A former Minister of State for Education, Prof. Jerry Agada said: “The fact is that those defecting and those not defecting are optimistic about what they are doing. They think they are doing it for good reasons.

“On President Buhari, the fact is that there is a way that man handles his political matters. It seems to me that he looks at himself as the only person who knows everything, while he looks at others as people who do not know what they are doing.

“If not, right from the time people started talking about these defections, at least some measures would have been taken to avert them.   But most of the time he was  unconcerned. It was the same kind of behavior he put up when they were electing the leadership of the National Assembly earlier in the life of his administration.

“He thinks because people were saying he is a man of integrity, there is no need to do more to be able to maintain that integrity.”

Convener of Middle Belt Movement for Justice and Peace, MBMJP, Joe Bukka said:   “Unfortunately, the inability of the President to shed his military mentality has become his albatross. Nigerians believed in him but he has lost it all. More Nigerians are poorer today   compared to when he assumed office. Herdsmen have continually threatened the cooperate unity of this country and he chooses to remain mute.

“The fact is that the North Central in no longer for him. His support base in the core North is currently divided and even the entire South is pained by the   attitude of the presidency to herdsmen killings across the country. In fact, it will take more than a miracle to have Buhari win another term in office.”