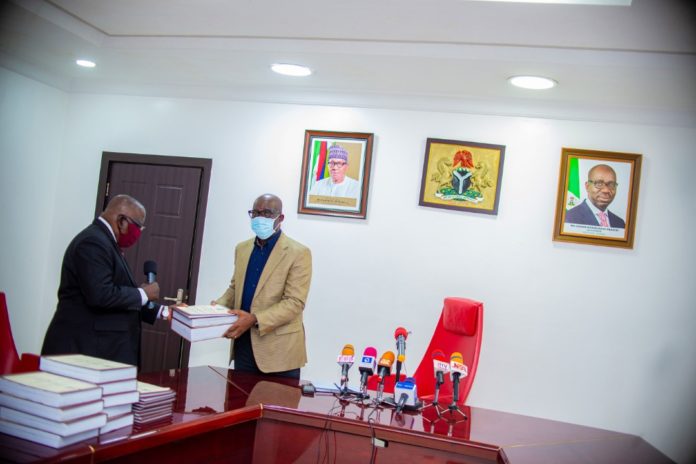 The Judicial Commission of Inquiry into the construction of the Edo Specialist Hospital and supply of equipment for the hospital has indicted the administration of the former Governor of Edo State, Comrade Adams Oshiomhole for breach of the state’s Public Procurement Law.

Chairman of the Commission, Justice James Oyomire (rtd), who presented the commission’s findings to Governor Godwin Obaseki, at Government House, in Benin City, on Thursday, said the award of the contract for the construction of the hospital was fraught with breaches of the state’s procurement laws.

He said the procurement law clearly states that any contractor working on a government project should not receive more than 25 percent upfront payment upon contract award, which Oshiomhole’s administration contravened.

Justice Oyomire said “the immediate past administration paid 75 percent of the contract sum upfront for the project to Vamed Engineering.”

He said part of the commission’s 8-point recommendation includes that the Ministry of Justice should institute civil and criminal actions against those found culpable in the breach of the law.

The recommendations, according to him, also include the strengthening of the state’s public procurement agency and ensuring strict adherence to the provision of the agency’s law on award of contract.

Governor Obaseki, while receiving the report, assured that anyone found culpable, no matter how highly-placed, will be called to account for their action.

According to him, “We have been putting the right measures in place and if there are resources of government that need to be returned back, we will not hesitate to ask for it.

“Since I came into office, you cannot find this type of breach you have mentioned. If people have to face prosecution, whether civil or criminal, they will have to be prosecuted. When you are given a public trust, so much is expected from you and there is a responsibility to maintain that public trust. We want to build institutions and not individuals because individuals will come and go, but institutions will remain.”

Noting that the past eight weeks have been very revealing with the outbreak of the coronavirus, he said it has given him the opportunity to have a first-hand encounter and knowledge of the state’s healthcare sector.

“The people who have the opportunity of rebuilding the system took further steps in destroying the already weakened system. We shall seat down and thoroughly review this report,” he added.

During the submission of the commission’s report at the Government, Benin City on Thursday, May 14, 2020